A Portrait of Missouri Through Hollywood’s Lens

Missouri is Representative of the United States as a Whole

Missouri is more representative of the entire United States than any other state. It is the “Gateway” where the East meets the West. The line dividing North and South was literally named “Missouri Compromise Line,” and Missouri was central to the start of the American Civil War, a war in which both the North and the South claimed Missouri. Like our nation, people in Missouri feel divided by both race and geography (urban/suburban v. rural).  And similarly to our nation, the political map of Missouri is mostly red with big blue areas on the sides and a blue dot in the middle. Even the money situation in Missouri is reflective of that of our nation – the old money and attendant snobbery resides in the East but it is now rivaled in terms of money and relevance by newer forces out of the West.

Three of the four recent movies/series set in Missouri do not even attempt to show more than one aspect of Missouri’s diverse landscape. But one film does – Gone Girl. When the film begins, Missouri native Nick Dunne (played by Ben Affleck) and his wife Amy (who he met and married while the living in New York City), are living in a nice newer (est. 5,000 sq ft) home in a fictional small Missouri City on the Mississippi River. As the story unfolds, the audience gets to view a wide range of places in our state: to an office in a St. Louis City skyscraper, the St. Louis airport, a mansion in Ladue, a humble resort in the Ozarks, a truck stop, a casino, a motel, and a lakeside mansion. (Had they gone to a baseball game, a farm, and Mizzou, they would’ve really covered all the bases). Missourians speak English properly, and at least two went away for school and seem to be well-educated.

However, similarly to other recent films/series set here, the characters playing outsiders who come to Missouri are not impressed with it. Amy Dunne considers Missourians to be boring, fat and inferior people who believe Velveeta is a cheese. And when Amy’s mother comes to Missouri, here’s what she has to say about it: “My God, this place literally smells like feces.”

Still, this depiction of Missouri overall is extremely flattering compared to Missouri’s portrayal in two other recent films and a Netflix series.

If one were to look through the lens of “Three Billboards Outside of Ebbing, Missouri,” Netflix’s “Ozark,” and the highly acclaimed 2010 film “Winter’s Bone,” here’s what Missouri would look like:

Missouri is mostly wooded, but it has a lot of water, too. And those bodies of water sure are handy for stashing corpses! Besides woods and water, the Missouri landscape features junkyards, run-down buildings/shacks/barns, and a lot of roads (which are traversed primarily by pickup trucks). There are a lot of messy and odiferous animals – both living and dead. The living ones are noisy, too.

Inside Missouri homes, you will find more dead animals adorning wood-paneled walls and outdated fixtures and decorations. Also found in most homes are guns sitting out in the open and a lot of clutter, although no noticeable amounts of books are to be seen anywhere.

The Characters Sure Ain’t Fancy

Missourians are depicted as being poorly educated and backwards people who butcher the English language even more frequently than they butcher their animals and each other. Although they may be poorly educated, the kids learn to use them firearms real good.

Missourians are the opposite of fashionable. The best-dressed Missourians depicted are the ones in uniforms issued by law enforcement agencies or the military. (There is simply too much to hate about the wardrobe of every female Missourian depicted to go into further detail here).

Missourians apparently make a lot of overtly racist remarks. For example, after Martin Byrd (the main character in Netflix’s Ozark played by Jason Bateman) moves his family from Chicago to the Ozarks, one of the first conversations he has with a Missourian (a woman working in a clerk’s office) goes like this:

Clerk:  I’ve been to the Windy City. Oprah. December 1997. Thought it’d be her Christmas show, you know the one with all the free swag?

Clerk: No. Race. She traipses out a bunch a colored folks mad over what I still couldn’t tell you. Police, I think. Walk a mile in my crocs, I say.

In a later Ozark episode, we learn that gay Missouri men stay in the closet. Later still, a character named “Buddy” tells a Hispanic man “You need to shut your tamale hole.”

Similarly, in “Three Billboards,” the audience sees Officer Dixon (played by Sam Rockwell, who won an Oscar for the role) has a bad history with black people at the first billboard and then within seconds he tells the Hispanic man putting up the second billboard: “Listen you fucking beaner, I’d better start getting some straight answers out of you.”

The characters of Missourians seem to be guided by a moral code of sorts.

The #1 rule in the Missouri moral code – no snitching. While some people need killin’, snitching is never justified. It’s a shameful, capital offense. (Going to prison, however, isn’t shameful in Missouri. It’s a normal part of life).

This code is not really influenced by religion. In fact, Missourians seem to have a troubling relationship with religion if they have any at all.

The code requires that Missourians have zero tolerance for disrespectful behavior. One’s honor depends upon immediately responding to disrespect with violence. Some Missouri men don’t make exceptions to this rule when the disrespect comes from a woman, either.

This code doesn’t only require violence from men. Women in Missouri are violent, too. And many Missouri women are mean, vicious, and creative with their violence.

Avenging wrongs done to family members is also an apparent requirement of the Missouri moral code. And following this code (which often requires one to give anass-whoopin’’ to one or more other persons)  seems to keep Missourians pretty busy.

By the end of the Ozark, Wendy Byrd aptly sums up the place of her husband’s choice of relocation: “This place is death.” 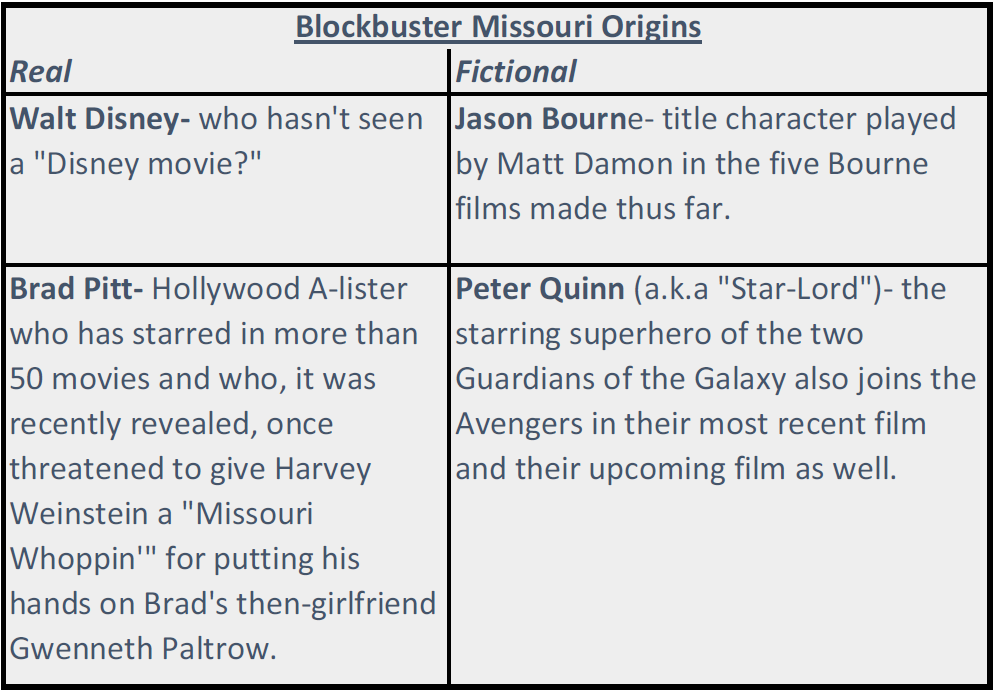 It Ain’t All Bad

The one bright spot in this otherwise bleak landscape that Hollywood portrays of Missouri is this — Missourians are tough as hell. The rest of the country has been warned – mess with a Missourian and you will get your ass kicked (or worse). This probably saves us from all kinds of unwanted back-talk from them fancy folk from other states that we sometimes come across.

Despite the less-than-flattering depictions of Missourians out of Hollywood lately, I really hope they show me more movies and shows set in Missouri.

If they make more Missouri movies and shows, I’m confident that they’ll discover that Missourians, like Americans, come with a wide variety of attributes and struggles.
https://themissouritimes.com/49217/show-me-a-state-misrepresented/
Share this...