Our Workplace Sexual Harassment Conversation Should Include Women Who Misbehave Too

Two blonde female Democrat State Representatives — a freshman and a ten-year veteran — stood in the receiving line back-to-back at the Missouri Governor’s mansion at the start of legislative session. The veteran told her new 29-year-old colleague:

“You’re so young and pretty, and we’re going to teach you a few things around here.”

When the women reached the Governor’s place in the line, the veteran (Winnie Weber) pointed at the freshman and loudly told the Governor “she may be young, but she hasn’t got these.” She then proceeded to proudly push her large breasts together and shake them for the Governor.

This was one of several anecdotes Claire McCaskill recounts in her 2015 memoir to describe the culture at the Capitol during her freshman year in the Missouri Legislature in 1983. She also described an encounter she had with then-Speaker Bob Griffin:

ONCE I HAD TO ASK HIM FOR HELP AND ADVICE ON HOW TO GET MY FIRST BILL OUT OF COMMITTEE. HE WAS ON THE DAIS AND LAUGHINGLY SAID, “WELL, DID YOU BRING YOUR KNEE PADS?” I KNEW HE WAS JOKING, THE PROBLEM WAS THAT HE DIDN’T REALIZE IT WAS AN OFFENSIVE JOKE. THIS WAS ONE EXAMPLE OF THE BAD JOKES THAT WERE TOLD. AND THAT WAS MANY TIMES THE ESSENCE OF THE PROBLEM: MEN IN JEFFERSON CITY DID NOT UNDERSTAND OR COMPREHEND HOW OFFENSIVE THEIR HUMOR CAN BE.

But it wasn’t just the “men in Jefferson City” who used offensive humor. Women legislators “who would try to be one of the boys” were “cracking dirty jokes” too, according to McCaskill’s memoir.

Unlike McCaskill’s memoir, our 2017 national conversation about workplace sexual harassment has been extremely one-sided. And it shouldn’t be because, after all, it’s not just boys who behave badly. 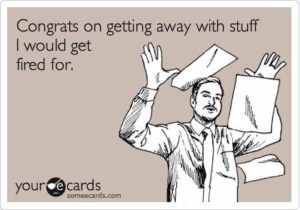 To be clear, I think it would be unfair for us to view Winnie Weber’s use of cleavage in the 1980s through a 2017 lens. Today’s standards shouldn’t apply ex post facto to the 1980s for anyone.

But what hasn’t changed between the 1980s and today is the fact that one woman’s workplace conduct affects how other women perceive what’s expected from them. And it impacts both men and women’s beliefs about what behaviors are acceptable and what people should tolerate in the workplace.

McCaskill felt that women like Winnie Weber made it more difficult for women who wanted to be taken seriously and who do not want to be marginalized and treated like a sex object. And I can see why. It seems Winnie’s reputation as the “life of the party” was well-earned. Fun facts:

It’s called “work,” as opposed to, say, “frat party” or “fantasy land,” for a reason. And at work, no one should tell naughty jokes, make vulgar gestures, or subject co-workers to sexual comments. Further, the rule we learn and comply with in kindergarten about touching each other applies at work too. So, keep your hands to yourself, boys and girls!

Regardless of where one falls in the workplace hierarchy, sexually inappropriate behavior at work is not “harmless.” It sends the wrong signals to both men and women about acceptable and expected behavior. Tolerance of sexual misbehavior can create a culture of workplace sexual harassment. Permitting one woman to use inappropriately sexual tactics at the office can lead to other women feeling pressured to follow suit, and it also can make it more difficult for women to be taken seriously. And, finally, women can make men feel very uncomfortable (a.k.a. “harassed”) too – with or without a fur coat.

For these reasons, we need to call out the badly behaving men AND women at work to change workplace culture. And furthermore, if women allow or expect a double-standard when it comes to talking about sex and/or touching people at work, don’t be surprised if men start to become more hesitant to hire women at all. The more one-sided we leave this conversation, the worse the backlash from the fallout of Harvey Weinstein et al. will be for professional women.

The good news is that the solution going forward is quite simple: When you’re at work, don’t talk about sex and don’t touch your co-workers. Or, to put it another way:

Don’t give me no lines and keep your hands to yourself.